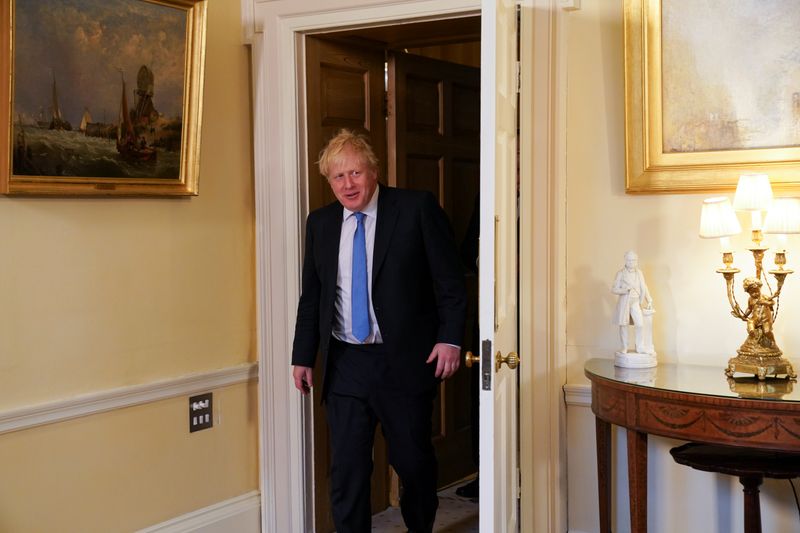 LONDON (Reuters) – Prime Minister Boris Johnson will hail Brexit day on Friday as “the dawn of a new era” and pledge to unite Britain in an address to the nation which he hopes will draw a line under years of angry debate over the European Union.

On the day the United Kingdom ends its more than 40-year membership of the EU, Johnson, the face of the Brexit campaign, wants to avoid seeming triumphalist.

He says he will celebrate “respectfully” to mark the country’s most significant geopolitical shift since World War Two, one that has also left deep wounds.

When Britain leaves, little will change immediately. Johnson has until the end of the year to negotiate a new trade and future relationship deal with the bloc — something that the EU has repeatedly warned will not be easy.

But on Friday Johnson, who gambled with his reputation and future career by backing the Leave campaign in 2016, will toast Britain’s much-delayed departure with his team at his Downing Street residence, shunning some more extravagant parties planned in the capital by Brexit supporters.

He will also be keen to move the debate on, to concentrate on meeting election pledges to help voters in more deprived regions of Britain that secured his governing Conservative Party a landslide victory in December. Some in his team joke that the word “Brexit” will be banned after Friday.

“This is the moment when the dawn breaks and the curtain goes up on a new act,” Johnson will say in a television address due to be aired late on Friday.

“This is the dawn of a new era in which we no longer accept that your life chances — your family’s life chances — should depend on which part of the country you grow up in.

“This is the moment when we begin to unite and level up,” he will say, according to extracts released by his office.

After years of political wrangling in the wake of the June 2016 EU referendum, Johnson won December’s election by winning over many voters who traditionally supported the opposition Labour Party with the simple message “get Brexit done”.

With a large majority of 80, the prime minister now has more freedom to mould Britain’s agenda than any Conservative government since the days of Margaret Thatcher in the 1980s.

But he also inherits a country where arguments about whether to stay in or leave the EU have divided towns, villages, friends and families for more than three years, and where many people increasingly distrust politicians.

While wanting to celebrate Brexit, Johnson is also fearful of alienating the millions of Britons who supported staying in the bloc, especially in Scotland and Northern Ireland.

Nationalists in Scotland are increasingly pressing for a new independence vote there, while the Brexit saga has fueled talk in Northern Ireland of reunification with EU-member Ireland.

European Union chiefs vowed on Friday to find new ways of working together with Britain “as allies, partners and friends”.

Johnson also wants to try to draw a line under the decades of painful battles over Europe within the Conservative Party which contributed to the downfall of four of his predecessors – Thatcher, John Major, David Cameron and Theresa May.

Instead, he will focus on boosting funding for, and delivering infrastructure projects to, northern and central England, where thousands of Labour supporters switched to vote Conservative, often for the first time.

“Our job as the government — my job — is to bring this country together and take us forward,” Johnson will say.

“And the most important thing to say tonight is that this is not an end but a beginning … It is a moment of real national renewal and change.”